It’s been over six months since we’ve added new titles to the Academy Library collection — but now we’re back and putting out new books as fast as we can! Here are some of the latest nonfiction titles — look for them in the New Books section!

Almost American Girl: An Illustrated Memoir by Robin Ha — A powerful and moving graphic novel memoir about immigration, belonging, and how arts can save a life — perfect for fans of American Born Chinese and Hey, Kiddo. “Presented in full-color splendor, [Ha’s] energetic style mirrors the constant motion of her adolescent self, navigating the peripatetic turbulence toward adulthood from Seoul to Alabama to Virginia and back to Seoul — just for a visit — before finally arriving home” (Booklist starred review).

Charlotte Brontë Before Jane Eyre by Glynnis Fawkes — A graphic novel overview of the life of Charlotte Brontë up until the publication of Jane Eyre, presenting a stunning examination of a woman who battled against the odds to make her voice heard. “A biography that goes beyond static history, inspiring respect for Charlotte and encouraging writers and artists to defend their work through adversity” (Kirkus Reviews).

The Dozier School for Boys: Forensics, Survivors, and a Painful Past by Elizabeth A. Murray — An in-depth examination of the events surrounding the closing of the Dozier School for Boys in Florida, a reform school that had been in use for one hundred years, in which several of the students were physically and sexually abused. “A grim, harrowing, and important read with insights into the troubled juvenile justice system” (Kirkus starred review).

The First Conspiracy: the Secret Plot to Kill George Washington by Brad Meltzer and Josh Mensch — New York Times bestselling author Brad Meltzer unravels the truth behind the secret assassination attempt on George Washington and how the plot helped create the CIA and the FBI in this young reader’s adaptation for younger audiences. “Despite the shorter text, this version is still packed with sophisticated details, making it suitable for both YA and adult history collections” (Booklist).

Flowers In The Gutter: The True Story Of The Edelweiss Pirates, Teenagers Who Resisted The Nazis by K.R. Gaddy — The story of the Edelweiss Pirates, a loosely organized band of working-class teenagers during Germany’s Third Reich who fought the Nazis by whatever means they could. “Readers will enjoy learning about these resistance groups in this truly new and unique addition to the YA World War II literary canon. A must-read” (School Library Journal starred review).

Hope in the Mail: Reflections on Writing and Life by Wendelin Van Draanen — In this guide to writing and living the creative life, Wendelin Van Draanen shares what she’s learned from her years as a published author — and from the ten years she spent trying to become a published author. “The very honest and practical discussions about advances, self-publishing, and the craft of writing will be of great benefit to newbie writers of any age” (Booklist starred review).

A Quick & Easy Guide to Queer & Trans Identities by Mady G & J.R. Zuckerberg — Cartoonists Mady G and J.R. Zuckerberg guide you through the basics of the LGBTQ+ world, covering essential topics like sexuality, gender identity, coming out, and navigating relationships, this guide explains the spectrum of human experience through informative comics, interviews, worksheets, and imaginative examples. “Accessible to readers at all levels of familiarity with LGBTQIA+ topics, this is a first purchase for libraries serving teens and adults” (School Library Journal).

Rehab or Punishment: What To Do About Drug Crimes by Carla Mooney — How should society deal with drug crimes? Many people support tough-on-crime laws and harsh sentencing guidelines, while others believe that rehabilitating offenders with drug addiction and other issues is a more humane and effective way to deal with drug crimes and make communities safer for all. “Clear explanations, photos, source notes, an organization list, further research options, index, sidebars with quotes, and anecdotes make this a useful resource” (Booklist).

The Rise and Fall of Charles Lindbergh by Candace Fleming — From a true master of nonfiction, discover the dark side of Charles Lindbergh in a riveting biography of one of America’s most celebrated heroes, and most complicated, troubled men. “A must-read. Drawing on primary sources, including Lindbergh’s own journal, Fleming has crafted a cautionary tale of the downfalls of hero worship” (School Library Journal starred review).

Stealing Nazi Secrets in World War II: an Interactive Espionage Adventure by Elizabeth Raum — The Axis are a powerful force in World War II. Learning their secrets gives the Allies a chance to stop them. Will you: Fly the deadly skies to take pictures of German military sites? Share secrets that come over wireless communication from Nazi-occupied Paris? Steal information from the Japanese military as a secret agent? You Choose offers multiple perspectives on history, providing readers a front-row seat to the past.

Stolen Justice: the Struggle for African American Voting Rights by Lawrence Goldstone — In this portrait of the systematic suppression of the African American vote, Goldstone traces the injustices of the post-Reconstruction era through the eyes of individuals both heroic and barbaric, and examines the legal cases that made the Supreme Court a partner of white supremacists in the rise of Jim Crow. “Short chapters, ample photographs and illustrations, judicious use of illustrative quotations, and straightforward prose make this an engaging read. A critical work” (Kirkus Reviews).

This Book Is Anti-Racist: 20 Lessons On How To Wake Up, Take Action, And Do The Work by Tiffany Jewell — Who are you? What is racism? Where does it come from? Why does it exist? What can you do to disrupt it? Learn about social identities, the history of racism and resistance against it, and how you can use your anti-racist lens and voice to move the world toward equity and liberation. “Combining the disruption of common fallacies, spotlights on change makers, the author’s personal reflections, and a call to action, this powerful book has something for all young people no matter what stage they are at in terms of awareness or activism. Essential” (Kirkus starred review). 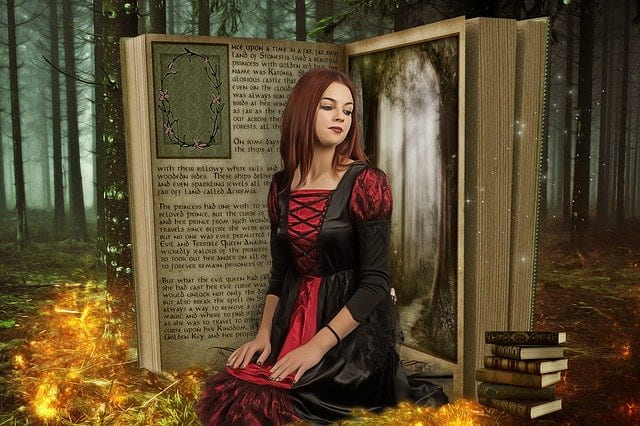 (Image by Enrique Meseguer at Pixabay)

Here are some great eBooks and audiobooks in the fantasy genre available in the Sora Reading App — look for it in BravesLink!

The Assassin’s Blade by Sarah J. Maas — In these five prequel novellas to the best-selling Throne of Glass series, feared assassin Celaena embarks on daring missions that take her from remote islands to hostile deserts, where she fights to liberate slaves and avenge tyranny. “In Throne of Glass and Crown of Midnight, Maas refers to events in assassin Celaena’s past that led her to become the King’s Champion; this compilation of five prequel novellas recounts her experiences in the Assassins’ Guild” (Horn Book).

An Ember in the Ashes by Sabaa Tahir — Laia is a Scholar living under the iron-fisted rule of the Martial Empire. When her brother is arrested for treason, Laia goes undercover as a slave at the empire’s greatest military academy in exchange for assistance from rebel Scholars who claim that they will help to save her brother from execution. “Tahir’s deft, polished debut alternates between two very different perspectives on the same brutal world, deepening both in the contrast” (Publishers Weekly).

Harry Potter and the Cursed Child, Parts 1 and 2 by J.K. Rowling, Jack Thorne and John Tiffany — It was always difficult being Harry Potter and it isn’t much easier now that he is an overworked employee of the Ministry of Magic, a husband and father of three school-age children. While Harry grapples with a past that refuses to stay where it belongs, his youngest son Albus must struggle with the weight of a family legacy he never wanted. “Many of the themes that made the original series great are still in abundance — love and friendship conquering all, facing your flaws and accepting them — so that it simultaneously still feels like a ‘Harry Potter’ tale while remaining its own story” (School Library Journal).

Miss Peregrine’s Home For Peculiar Children by Ransom Riggs — Sixteen-year-old Jacob, having traveled to a remote island after a family tragedy, discovers an abandoned orphanage, and, after some investigating, he learns the children who lived there may have been dangerous and quarantined and may also still be alive. “An enjoyable, eccentric read, distinguished by well-developed characters, a believable Welsh setting, and some very creepy monsters” (Publishers Weekly).

Red Queen by Victoria Aveyard — In a world divided by blood — those with common, Red blood serve the Silver-blooded elite, who are gifted with superhuman abilities — seventeen-year-old Mare, a Red, discovers she has an ability of her own. “Aveyard weaves a compelling new world, and Mare and the two men in her life evolve intriguingly as class tension rises” (Kirkus Reviews).

Children of Blood and Bone by Tomi Adeyemi — Seventeen-year-old Zelie, her older brother Tzain, and rogue princess Amari fight to restore magic to the land and activate a new generation of magi, but they are ruthlessly pursued by the crown prince, who believes the return of magic will mean the end of the monarchy. “Complex characters, colossal stakes, and a kaleidoscopic narrative captivate, and the book’s punishing pace catapults readers to a jaw-dropping conclusion that poses as many questions as it answers” (Publishers Weekly).

A Court of Thorns and Roses by Sarah J. Maas — When nineteen-year-old huntress Feyre kills a wolf in the woods, a beast-like creature arrives to demand retribution for it. Dragged to a treacherous magical land she only knows about from legends, Feyre discovers that her captor is not an animal, but Tamlin — one of the lethal, immortal faeries who once ruled their world. “A story that, despite its hefty page count and ambitious scope, simply dazzles. Refreshingly, there are no cliff-hangers here, but enough open-endings ensure that the clamor for a sequel will be deafening” (Booklist).

Fantastic Beasts and Where To Find Them by Newt Scamander with J.K. Rowling — Newt Scamander’s classic compendium of magical creatures, has delighted generations of wizarding readers. Now, in this updated edition with a new foreword by Newt himself and the unveiling of six beasts little known outside the American wizarding community, Muggles too have the chance to discover where the Thunderbird lives, what the Puffskein eats, and why shiny objects should always be kept away from the Niffler.

Eragon by Christopher Paolini — Fifteen-year-old Eragon believes that he is merely a poor farm boy — until his destiny as a Dragon Rider is revealed. Gifted with only an ancient sword, a loyal dragon, and sage advice from an old storyteller, Eragon is soon swept into a dangerous tapestry of magic, glory, and power. “The empathetic characters and interesting plot twists will appeal to the legions of readers who have been captivated by the ‘Lord of the Rings’ trilogy and are looking for more books like it” (School Library Journal).

The Golden Compass by Phillip Pullman — Accompanied by her daemon, Lyra Belacqua sets out to prevent her best friend and other kidnapped children from becoming the subject of gruesome experiments in the Far North. “A totally involving, intricately plotted fantasy that will leave readers clamoring for the sequels” (Booklist). 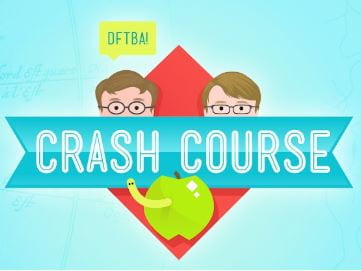 With over 10 million subscribers and 1.2 billion total views, the CrashCourse video series is one of the most popular educational channels on YouTube — and for good reason! The various series cover a wide range of topics in an engaging format that is both entertaining and informative:

There’s something for everyone who would like to get a little bit o’ learnin’ in the following subjects:

I'm the library media specialist at Canandaigua Academy in upstate New York. Feel free to read some posts and comment on whatever you'd like. Comments are moderated and are subject to approval by me.